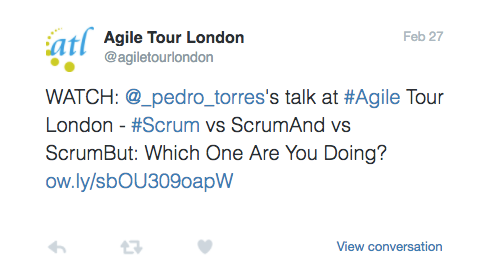 Fui apresentar a versão melhorada da talk que tinha dado no Agile Portugal 2016: Scrum vs ScrumAnd vs Scrumbut: Which One Are You Doing? 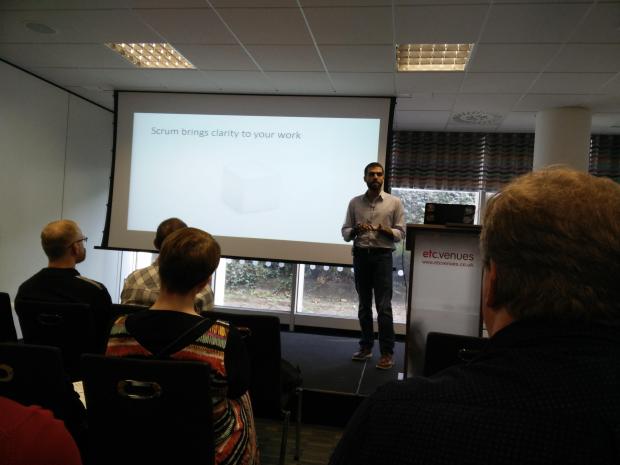 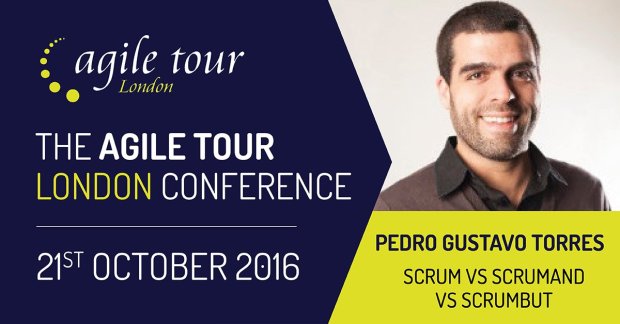 Vai ser uma excelente oportunidade de melhorar a minha talk “Scrum vs ScrumAnd vs ScrumBut: Which one are you doing?” e ver a receptividade do público Londrino.

The 2015 State of Scrum Report tells us that Scrum is currently the most adopted agile practice.

In-spite of the massive popularity of this framework we see that organizations rarely use vanilla Scrum… using instead ScrumAnd or even ScrumBut.

ScrumAnd is basically everything that you put on top of the framework… and this is perfectly natural and shows the (agile) maturity of the organization.

ScrumBut is all that you supposedly should do… but in fact you aren’t doing: Retrospectives, Reviews, etc.

When you learn Scrum you have three different stages towards mastery: Shu Ha Ri.

Shu is when you learn the basics. In this stage you’ll learn “Vanilla” Scrum staying strictly in the Scrum Framework.

You get to the Ha stage is when you feel confident enough to start to make changes to the process. It’s in this stage that you make a very important decision:

Or choose the path of ScrumBut.

If you go for ScrumAnd (choosing to put add-ons on top of the scrum framework) you’ll probably reach (someday) the Ri stage: Going beyond Scrum

On the other hand, if you choose ScrumBut (modifying the framework) you’ll almost for sure never reach the Ri stage… and probably get to the (wrong) idea that scrum doesn’t work.

Although add-ons and modifications seem quite similar… they are very different. An add-on is keeping everything you have and simply add more stuff on top. Modifications is changing what you already have… ending up with something completely different from what you had.

ScrumAnd usually goes like this: “We do Scrum… And…”

Here you have some examples of what ScrumAnd can be:

ScrumBut typically goes like this: “We do Scrum… But…”

Here are a few examples of what ScrumBut can be:

For final remarks, I believe that you shouldn’t aim for effectiveness (ScrumBut) but for efficiency (ScrumAnd).

There is nothing “wrong” in modifying the scrum framework… you just shouldn’t (probably) call it scrum! And (at least) make sure that you are doing it for the right reasons!

For what it matters… don’t forget that your goal is to make (awesome) software… and not to (just) do scrum.

Hi! Welcome to my website.
The goal of this space is to share knowledge around Agile, Engineering Management and its practices.

Find me in the Social Networks